“Can a life not have gaps? Those surprising leaps, those irregularities ... all the things that naturally never appear in a play”, exclaims the comedic actor, Feuerbach.

Under the direction of Antonio Simón, ”I, Feuerbach” is presented as a beautiful and intense work on the social and personal crises that force us to reinvent ourselves. Pedro Casablanc takes on one of the biggest challenges in his career in order to play an actor in decline; a mature artiste who has great qualities, but some dark episodes in his past that have led him to now be left without any work. A generation gap emerges between him and his counterpart on the stage, a young and unexperienced assistant director who has just entered the world of theatre, played by Samuel Viyuela González.

Two generations and two different ways of proceeding come up against each other on stage.From the stall, we bear witness to the trials and tribulations of an actor who is growing old. Obtaining a role seems to be the only thing that might secure his survival. Genius and madness go hand in hand in a character who is both comic and tragic at the same time. In this respect, “I, Feuerbach” is not just a text that talks about creation, the art of the actor and the art of performing, but also about everything in life, including learning, love, gratitude, mercy, empathy, fragility and difference.

Casablanc returns to La Abadía with a virtuoso performance that shows us who that actor known as Feuerbach really is, based on one of the most popular texts by the recently deceased ninety-year-old German playwright, Tankred Dorst, whose works are still little known in Spain.

A beautiful and intense play; exciting, full of humour and poetry and vibrating with existential unease. (“ABC”) Memorable! (“El Mundo”) You must not miss this play! (“El País”) 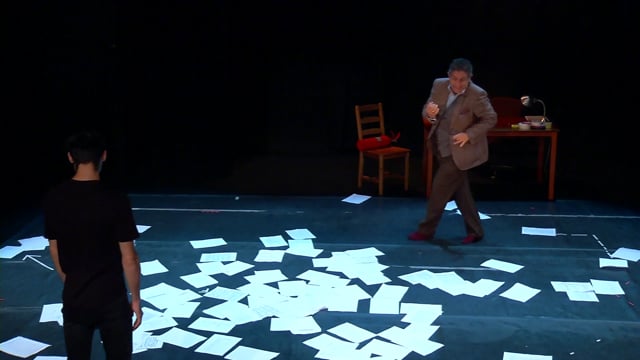