Moses is a cantankerous puppet who is two feet tall, who has a cardboard head and who lives on a table. And he has a problem. The only thing he is ever asked to do is to act in fairy tales and at children's parties. And he's fed up with it! He is an artiste! He's a serious puppet!
So tonight, for one night only, the table is his and he is going to act. It will be an
epic occasion. The last twelve hours in Moses' life, in real time, on his table.
Moses has been compared to a stand-up comic, only he is "a three-man-operated
Bunraku-style puppet with a cardboard head" and lives on a table. "The Table" ("La Mesa") is part comedy, part Beckett-inspired theatre and part existential thesis on the art of puppetry.

A unique and hilarious production, this work provides a sublime demonstration of the puppeteer's art, one that has never been seen before. Our amateur philosopher explains the art of puppetry, has disagreements with his puppeteers, shows us his dancing skills, analyses the Bible and has an accident with an invisible running machine. Throughout the performance, our puppet wins over a theatre full of admirers as the audience watches his painful attempts to rescue his show from chaos.
This award-winning production pays homage to the art of puppetry and is inspired by Beckett, the Bible and IKEA.

"The Table" was premièred to great acclaim at the Edinburgh Fringe Festival in 2011, where it received the Fringe First Award. 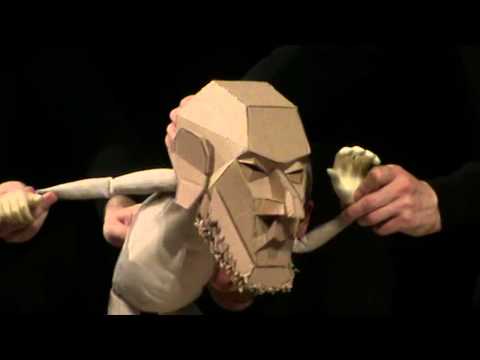