Mercaderes de Babel is a collective creation from TCompañía de Babel, directed by Carlos Aladro, which employs The Merchant of Venice as a pretext to create a work written by José Padilla, who has adapted the issues and questions raised by this play to the company’s own needs when contemplating the world as it is today.

“Over and above the questions of charity and interest, the enigma of real love remains unsolved; its absence, more than the confusion it provokes, shows us how much we need it, and this leads us to sense it, because this play, in spite of its dark and tragic overtones, has always been considered a comedy, of laws and legacies, of misunderstandings and malicious acts, where only one god rules under a veil of appearance, in his cast-iron patriarchy: money.” (José Padilla)

This encounter could be considered to constitute a multiple reflection in the same mirror: two cultures and two theatre traditions, the English tradition (Greg Hicks) and the Spanish tradition; two playwrights, Padilla and Shakespeare; two time-periods, the sixteenth century and the twenty-first century; and two cities that serve as a capital metaphor for commerce and confusion, Venice and Babel, “the great lagoon” and the origin of ‘babbling’. The idea was to create a show on the present-day world with its globalised market, replete with an ongoing judgment regarding the questions of legality and legitimacy, ethics and morality, questioning the price that Mankind is obliged to pay. As the play suggests, all “for a pound of flesh”.

Who is the oppressed? Shylock? Is he the only one? Who are the ones who play the role of Shylock? Who are the powers that oppress? How does the idea of justice change according to the power in question? How does the concept change over time? Who judges it? What does it matter? And to whom? What is at stake? Who comes out of it unscathed? Who judges whom? 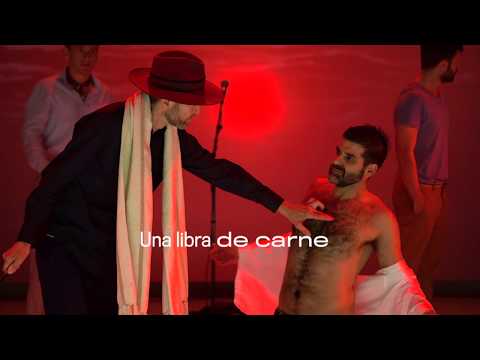