In just three years since their meeting at the Edinburgh Festival Fringe in 2015, French Bertrand Lesca and Greek-British Nasi Voustas, have turned into one of the most important tandems of emerging artists on the contemporary British scene, as highlighted, among others, by The Guardian theatre critic Lyn Gardner, who also reviewed PALMYRA as “a brilliant piece that reflects on Syria and the breakdown of relationships”. It has also been said that “it's rare to see emerging artists with such a strong signature style. [Their work is] stressful, yes, but sublime as well” (WhatsOnStage).

Lesca and Voutsas have made a name for themselves by being capable of gauging the pulse of the turbulent times we live in through work similar to that of a clown. Their shows are brutally fun, and laughter mixes with violence. At the Autumn Festival they bring their work to Madrid with a double programme that does not just include their celebrated début , EUROHOUSE, but also their second creation, PALMYRA. They are both the only pieces that the charismatic duo has devised together to-date.

PALMYRA -branded by international critics as “surprising efficient, incisive and lively” (The Times)- was premiered at the prestigious Edinburgh Festival Fringe in August 2017, with the same success as its predecessorEUROHOUSE, and consequently more performances had to be scheduled to meet popular demand. On this occasion, the duo was inspired by ISIS’s destruction of the city of Palmyra (the Syrian city had an imposing historical heritage that was destroyed by the Islamic State). Lesca and Voutsas take to the stage to reflect upon what the shame and barbarity mean. In the words of The Independent, this work “beguiles and unsettles simultaneously, performed with extraordinary physical power... A highly gifted enterprise”. 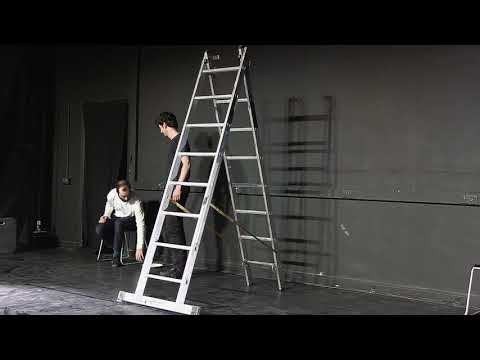