Travel books, accounts by those who travelled along pathways seldom trodden, became an habitual genre that rapidly passed into the journalistic realm during the nineteenth century.

On the 50th Anniversary of the Death of Azorín, La Abadía will present the stage adaptation of his chronicles written in 1905, when the Madrid daily newspaper, El Imparcial, sent him to La Mancha to retrace the route that the ingenious gentleman Don Quixote undertook in the famous book.

Departing from his lodgings, with barely a suitcase, a couple of books and pencil and paper, our writer embarks on his journey, first by train and then by cart, to retrace the steps of the most emblematic fictional character in Spanish literature.

He follows the same route in order to discover, through his own observations and the testimonies of the people he comes across on his way, just how much of the famous knight’s deeds and adventures remain. Through a series of encounters, anecdotes and reflections, during the trip he will illustrate to his readers what he considers the essence of Cervantes’ timeless novel.

Eduardo Vasco uses this narrative, journalistic and poetic text, a text full of subtleties and references, to create an appealing historical and theatrical experience. Combining some enormously rich Spanish with a series of simple objects and projections, with the help of Azorín (Arturo Querejeta), the audience are able to explore the landscapes, villages and aromas of Cervantes’ novel in an intimate, personal and relaxed manner.

Directed and adapted by Eduardo Vasco 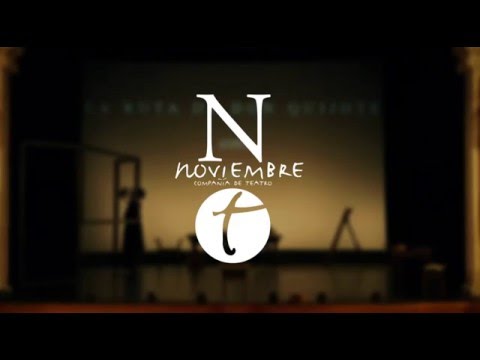