"A work that raises questions regarding contemporary fears, prejudices and trust"

A swimming instructor hugs and gives a kiss to a child at the swimming-pool. A simple gesture of tenderness or something more? As of that moment, the protagonist, his friends and even the audience are rapidly plagued by a series of suppositions, misunderstandings and suspicions. These apparently innocent gestures, when combined with an impenetrable layer of prejudices, rapidly evolve into fear and violence, leaving nobody indifferent to this text written and directed by the young playwright, Josep Maria Miró i Coromina.

'Archimedes' Principle' won the Born Theatre Prize 2011, was a Finalist for the Max Award for Best Theatre Text of 2012 and was nominated for the Butaca Theatre Awards - Best Text, Best Ensemble Actress and Best Scenery. Now, after its premiere at the Sala Beckett and after having been successfully presented in St. Petersburg, Puerto Rico, Buenos Aires, Mexico DF and London, this play comes to La Abadía.

With the support of: 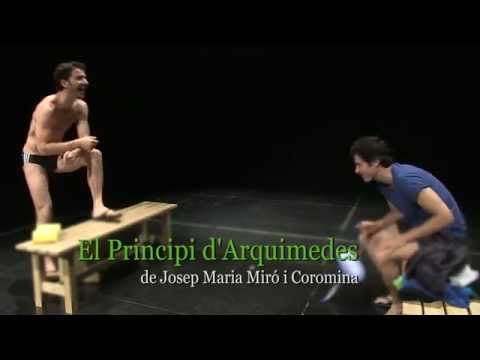